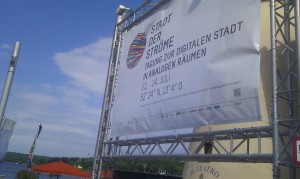 conference banner in front of the theatre

I had the great pleasure to be invited to an elite „dialogue“ with leading scholars in a domain that I left some 20 years ago. My PhD research at the university of Cologne was based on the question whether social structures and developments can be made „visible“ by analysing cultural artefacts and the corresponding reception documents. I was digging deep into the censorship of novels in 18th century France analysing some 600 novels and their „reception“ by censors of the Ancien Régime. I screened 15 years of censorship registers with decisions on refusing royal printing privileges and documenting seizures which gave me the possibilty to identify personal readers throuhout society and their relationship to a forbidden genre (comparable to todays computer games: everybody plays but officially it is not liked…). I did some correspondence analyses (a special statistical procedure en vogue at that time, permitting to deal with nominally scaled measures). Later I was teaching at the University of Stuttgart „Computerphilologie“ which meant TUSTEP, COLLATIO, CLIO – old mainframe software just appearing on PC. I was member of the Association for Literary and Linguistic Computing and was reading a lot of stuff from computational linguistics and „literary theory & the computer“… 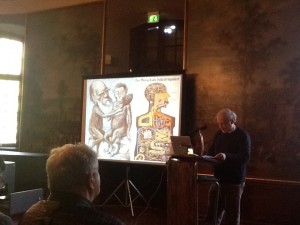 Willard McCarthy at the Cologne Dialogue on Digital Humanities

And eventually I was able to meet some of the main authors I was reading at that time, e.g. Willard McCarthy (picture during his talk in Cologne) at a conference with invited speakers only organised by Manfred Thaller one of the advisors of my PhD thesis: the Cologne Dialogue on Digital Humanities, which is meant to be a starting point for further conferences and for institutionalising eHumanities in Europe. Nice coincidence: coming backing to one’s roots but being able to join the ends of a story.

The conference held in the nice 18th century manor of Cologne Wahn (yes, near the airport) was organised such that two experts were speaking on the same aspect of the eHumanities but from different angles. Seven topics were addressed.

My part was being a non-technical counterpart to Ed Fox, whom I consider being „Mr. Digital Library“. One of my first courses I gave in Potsdam took his book as textbook. So: what a burden! On the other hand I sort of replaced Stefan Gradmann, which was a challenge too. I hope I could or can contribute to this debate. Unfortunately Ed Fox could not come to Cologne being seriously ill.

The intention is that on the CCHE Website the discussion will be continued. So please stay tuned on the „controversy on Digital Libraries“ there or post a comment on my text here – if you want. I am writing in English here in order to enable the workshop partcipants to understand this post too.

In my paper I address the question whether Digital Library engineering is able to generate knowledge or if – more fundamentally – Digital Libraries as they burgeon everywhere now make any sense at all.

Powered by WordPress | Hosted by Edublogs | Protected by CloudFlare